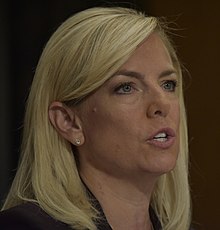 Kirstjen Nielsen is a lawyer by profession who found her way to the White House. Before she succeeded John Kelly as the Secretary of Homeland Security, she served as John Kelly’s Chief of Staff when he was the incumbent Secretary of Homeland Security. When Donald Trump was sworn in, Kelly and Nielsen worked on the smooth transition at the Oval Office, which included ensuring order. Many were skeptical about her appointment in view of her past failures.

From Clearwater Florida to serve under George W. Bush

Nielsen was born and raised in Clearwater, Florida. She earned her bachelor’s degree in Foreign Service from Georgetown and went on to the University of Virginia to earn her law degree. She graduated in 1999. Her first job in government was as a special assistant under George W. Bush’s administration. She then gained experience in home security. She has been in government for over a decade now.

Before her appointment as Secretary of Homeland Security, she had always been John Kelly’s right hand, establishing her reputation as Kelly’s enforcer. Towards the end of the year, Kelly brought Nielsen with him when he secured a post in the Oval Office. She was the Deputy Chief of Staff to Kelly’s Chief of Staff in 2017. They were a tag team.

Not everyone loves Kirstjen Nielsen

Working for the President of the United States at such a high level will surely earn someone like Nielsen some haters. It has been said she earned the monicker “Nurse Ratched.” She serves as gatekeeper to the POTUS and limits his exposure to extremists and critics who may twist the POTUS’ words and create controversies and paint a negative picture of the POTUS.

Nielsen has had her fair share of negative publicity and failures. When she was the Director for preparedness in the Security Council way back in 2005, she was one of the officials who received warning emails from FEMA regarding Hurricane Katrina. The email contained warnings that the incoming hurricane would be like the 2004 tsunami that claimed 250,000 lives along the coast of the Indian Ocean. However, none of the officials heeded the warning. Hurricane Katrina claimed an approximate of 2,000 American lives. Thus, Americans asked for blood and pushed for the termination of Nielsen and for her to be prosecuted for her failure to act and prevent the devastation of Hurricane Katrina.

Many people tried to search for information, especially personal information, about Kirstjen Nielsen. More so when her name came up as a candidate as Secretary of Homeland Security. But Nielsen made sure her private life remained private. There is no information about her personal life, her marital status, and net worth. Though many speculate that White House staff usually have a net worth around USD 1 million.

Nielsen has a no-nonsense and hardworking image. She does not seem to be the type to tolerate anything less than excellence. With this persona, we will surely see her in government for a long, long time.