Conspiracy theories behind Kanye West’s ‘So Help Me God’ artwork

You just can’t win with some people. Opinionated rapper Kanye West has been criticised for opening his mouth too much in the past but the tables have turned as the star appears to be annoying fans for not saying enough about his new album ‘So Help Me God’.

The Only One hitmaker sent Twitter into a frenzy after he shared the title of his upcoming album, ‘So Help Me God’, alongside some rather complex-looking artwork. The photo, which many believe is the design of his album cover, features symbology that has left many struggling to work out what it all means, prompting them to devise their own conspiracy theories.

Reddit have discovered that the diamond shape, which is connected by four lower-case m’s, is a 13th century monastic symbol for the Virgin Mary. Given that the title of his last album was ‘Yeezus’ and the first track from his latest album, ‘Only One’ was dedicated to his mother Donda West, some believe the album honours the late English professor.

Kayne West’s artwork for So Help Me God (Instagram)

There are even those who believe that the image isn’t the album artwork at all, but instead a hint as to when Kanye will release the album, following the news that the rapper will do as Beyonce and Drake did with their last albums and opt for a surprise release. “People are telling me that the date is ‘the Annunciation of the Virgin Mary’ and just in case somebody doesn’t know, that picture that Ye tweeted was the monastic symbol of the Virgin Mary, coincidence? Now, for the more evidence to support the link…” one fan began on Twitter.

“Kanye dropped Only One (1) and FourFive Seconds (45) to tell us: 145. The address of the ‘St Mary the Virgin Church in New York is: 145 W 46th St, New York. The Virgin Mary could represent Kanye’s mother Donda (who he sings from the perspective of on Only One) and Mary was the mother of Jesus, this links because Donda is the mother of ‘Yeezus’,” they added. Pretty complicated you must admit, though the idea isn’t totally incomprehensible. 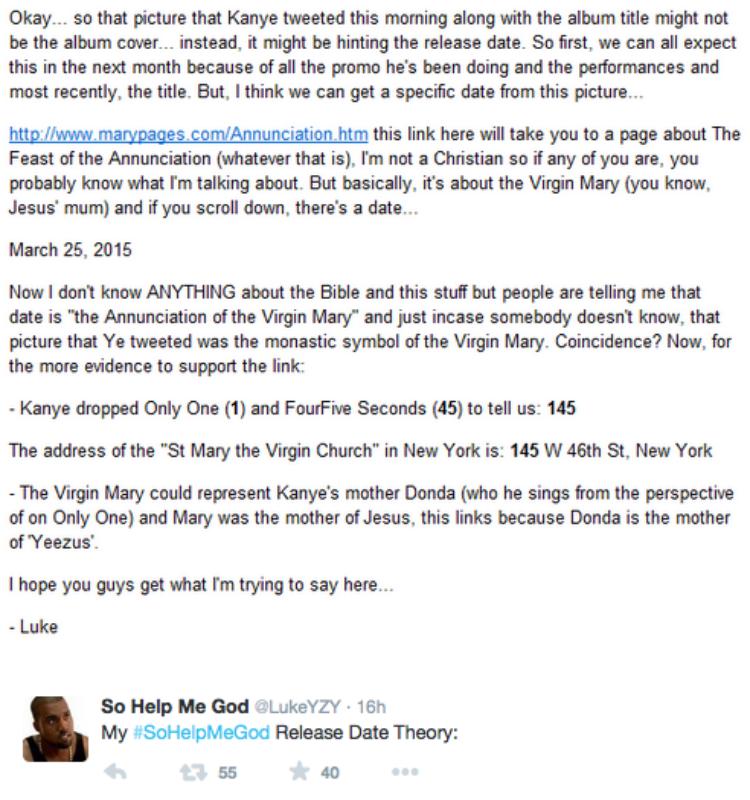 Others have linked the image to the Illuminati, a supposed secret ‘global elite’ society that is either in control of the world or is seeking to take control. “There’s 4 M’s, M is the 13th letter, 13×4=52, 5×2=10, there are 10 letters in illuminati,” another tweeted, though we can’t help but think this person might just have a little too much time on their hands.

A tracklist, claiming to be from Kanye’s forthcoming album has also leaked online, though there is nothing to say that this isn’t just a fan mock up. The supposed tracklist features songs ‘Wolves ft. Sia’ which the College Dropout star performed at New York Fashion Week, ‘Only One ft. Paul McCartney’, which has already hit the airwaves and ‘All Day’ which the musician performed at the BRIT Awards last Wednesday.