What almost reduced Margot Robbie to tears on the Wolf of Wall Street set?

Margot Robbie may have shared steamy sex scenes with Leonardo DiCaprio in The Wolf of Wall Street but the Aussie beauty has revealed a downside to starring in the Oscar tipped film – the ill-fitting vintage fashion.

The actress, who first found fame in Neighbours, plays Leo’s wife in the hit film and playing the gorgeous spouse of a millionaire stockbroker required the actress to squeeze into some designer fashion.

“It was so cool seeing vintage Chanel, Versace, Armani…” Margot Robbie says of costume fittings she underwent for her character, Naomi Lapaglia, but not all of the eighties and nineties pieces were the perfect fit.

Margot says one particular pair of Prada snakeskin boots gave her a very painful experience. Being vintage, they “were at least two sizes too small but I was so determined to wear them that we stretched them for two months,” Margot tells Grazia Daily. 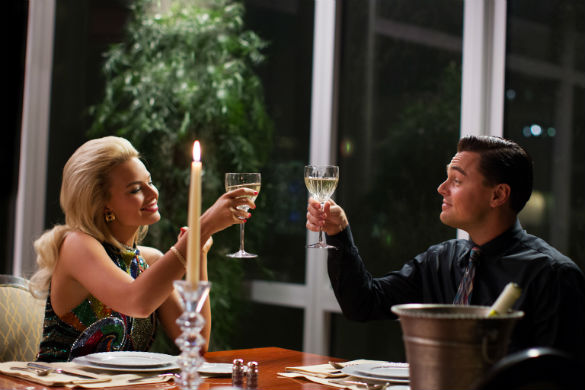 Margot and Leo in The Wolf Of Wall Street (Paramount Pictures)

“We oiled up my feet and put baby powder in the shoe and spent 20 minutes squeezing my feet into them, but they didn’t make it into the scene. I wanted to cry,” says Robbie.

The daily two hour hair and make-up sessions also added to Margot’s upset with the actress confessing that she was “revolted” by her character’s extensive beauty regime. “I don’t know how other women manage,” she says of her character’s “really long acrylic nails” she had to wear throughout the six-month shoot. Sadly we can’t be all be as naturally beautiful as you, Go.

“The most mundane tasks were suddenly monumental tasks – unbuttoning buttons, texting, tying shoe laces… I couldn’t believe how much it affected my life, it was so difficult,” the blonde added.

The Wolf of Wall Street hits UK cinemas on January 17.