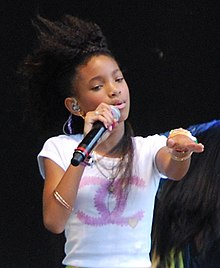 Get to know the 22-year old actress, musician, dancer, Willow Smith, before she got famous (e.g. Whip Your Hair & Being The Daughter of Actor Will Smith). IMDB reports The 12th Annual Critics' Choice Awards (TV Special) was Willow Smith's first TV appearance in 2007. In 2007 she starred as Marley Neville in her first movie I Am Legend. Her home town is Los Angeles, California, USA. Her parents Will Smith & Jada Pinkett Smith are of Afro-American ethnicity. Willow Smith was born on October 31, 2000 on a Tuesday.

Willow Smith released Whip My Hair, from the album in 2010.

Willow Smith - Whip My Hair Views: 201,739,131 Share your real life experiences with Willow Smith here and rate your meeting! Correct our wiki/bio - is she not gay or straight or of different heritage? Let us know!