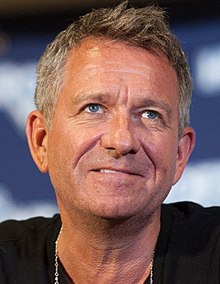 Get to know the 59-year old actor Sean Pertwee, before he got famous (e.g. He portrays Alfred Pennyworth on Gotham). IMDB reports Prick Up Your Ears was Sean Pertwee's first TV appearance in 1987. In 1987 he starred as Orton's Friend in his first movie Prick Up Your Ears . His home town is Hammersmith, London, England. His parents Jon Pertwee & Ingeborg Rhoesa are of German, English, ethnicity. Sean Pertwee was born on June 4, 1964 on a Thursday.

Prick Up Your Ears

Sean Pertwee Talks Gotham, Dr Who And His Father | This Morning