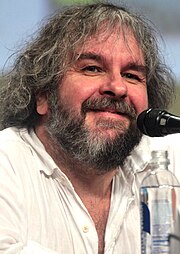 Get to know the 61-year old director Peter Jackson, before he got famous (e.g. The Lord of the Rings, King Kong, The Hobbit). IMDB reports Good Taste Made Bad Taste (Video short documentary) was Peter Jackson's first TV appearance in 1998. His home town is Wellington, New Zealand. His parents Joan (née Ruck) & William "Bill" Jackson, are of English, Welsh, ethnicity. Peter Jackson was born on October 31, 1961 on a Tuesday.

Peter Jackson interview on "The Lord of the Rings" (2002)

King Kong (3/10) Movie CLIP - Kong Battles the T-Rexes (2005) HD Views: 100.596.084 Share your real life experiences with Peter Jackson here and rate your meeting! Correct our wiki/bio - is he not gay or straight or of different heritage? Let us know!