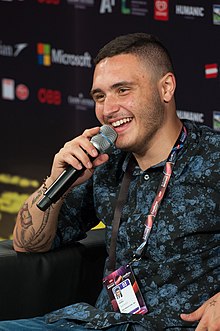 Get to know the 22-year old musician Nadav Guedj, before he got famous (e.g. Eurovision Song Contest 2015). IMDB reports HaKochav HaBa (TV Series) was Nadav Guedj's first TV appearance in 2014. His home town is Paris, France. He is of Israeli ethnicity. Nadav Guedj was born on November 2, 1998 on a Monday.