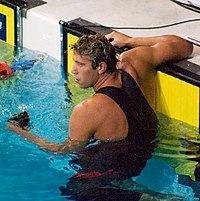 Get to know the 37-year old swimmer Matt Grevers, before he got famous (e.g. Six-time Olympic medalist). IMDB reports Today (TV Series) was Matt Grevers's first TV appearance in 2008. His home town is Lake Forest, Illinois. He is of Dutch ethnicity. Matt Grevers was born on March 26, 1985 on a Tuesday.