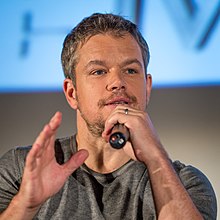 Get to know the 52-year old actor, writer, Matt Damon, before he got famous (e.g. Good Will Hunting). IMDB reports Academy Live was Matt Damon's first TV appearance in 1995. In 23/07/1990 he starred as Charlie Robinson in his first movie Rising Son. His home town is Cambridge, Massachusetts. His parents Kent Telfer Damon & Nancy Carlsson-Paige are of Scottish, English, Finnish, Norwegian, Swedish, ethnicity. Matt Damon was born on October 8, 1970 on a Thursday.

Matt Damon talks to Joe Leydon about "Good Will Hunting"

The Martian | Teaser Trailer [HD] | 20th Century FOX Views: 21.270.155 Share your real life experiences with Matt Damon here and rate your meeting! Correct our wiki/bio - is he not gay or straight or of different heritage? Let us know!