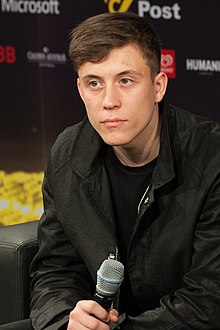 Loïc Nottet released Loïc Nottet - Rhythm Inside, from the album in 2015.

Loïc Nottet: I learned a lot, I did not know ABBA participated in Eurovision.

Loïc Nottet - Million Eyes Views: 29.595.873 Share your real life experiences with Loïc Nottet here and rate your meeting! Correct our wiki/bio - is he not gay or straight or of different heritage? Let us know!