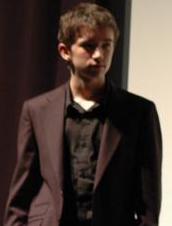 Get to know the 33-year old actor Liam Aiken, before he got famous (e.g. Klaus Baudelaire in A Series of Unfortunate Events). IMDB reports Henry Fool was Liam Aiken's first TV appearance in 1997. In 1997 he starred as Ned in his first movie Henry Fool . His home town is New York City, New York, U.S.. His parents Moya Aiken, and Bill Aiken, are of Irish ethnicity. Liam Aiken was born on January 7, 1990 on a Sunday.