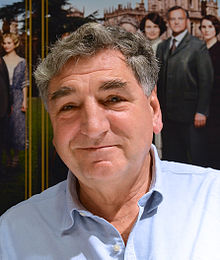 Get to know the 74-year old actor Jim Carter, before he got famous (e.g. Downton Abbey). IMDB reports The South Bank Show (TV Series documentary) was Jim Carter's first TV appearance in 1982. In 1980 he starred as Cliff Ryan in his first movie Fox (TV Series) . His home town is Harrogate, West Riding of Yorkshire, England. He is of English ethnicity. Jim Carter was born on August 19, 1948 on a Thursday.