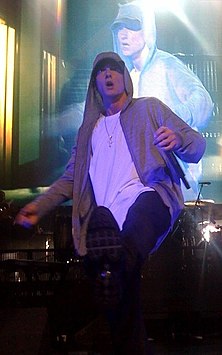 Get to know the 48-year old actor, musician, Eminem, before he got famous (e.g. My Name Is..). IMDB reports Programa Livre was Eminem's first TV appearance in 1991. In 2002 he starred as Jimmy 'B-Rabbit' Smith in his first movie 8 Mile. His home town is Saint Joseph, Missouri,USA. His parents Marshall Bruce Mathers II & Debbie Mathers Brigs are of German, Irish, Scottish, English, ethnicity. Eminem was born on October 17, 1972 on a Tuesday.

Eminem released Eminem - My Name Is, from the album The Slim Shady LP in 1999.

Eminem - Love The Way You Lie ft. Rihanna Views: 1.317.270.880 Share your real life experiences with Eminem here and rate your meeting! Correct our wiki/bio - is he not gay or straight or of different heritage? Let us know!