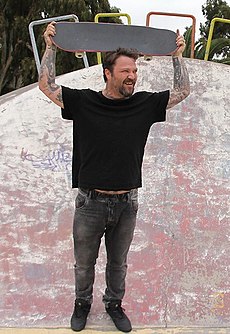 Get to know the 44-year old tv-personality Bam Margera, before he got famous (e.g. Skateboarding & Jackass). IMDB reports Jump Off a Building (Video short) was Bam Margera's first TV appearance in 1998. In 2000 he starred as Auto (as Brendan Margera) in his first movie 7-Teen Sips . His home town is West Chester, Pennsylvania, United States. His parents April (née Cole) & Phil Margera are of German, English, Italian, Welsh, ethnicity. Bam Margera was born on September 28, 1979 on a Friday.

Bam Margera's Reaction to Ryan Dunn's death Views: 10.694.213 Share your real life experiences with Bam Margera here and rate your meeting! Correct our wiki/bio - is he not gay or straight or of different heritage? Let us know!